A story of resilience and second chances—everyone needs second chances.  Everyone screws up at some point.  For some people, a second chance means the opportunity to change habits that lead to the experience of homelessness.
This is Crystal’s story.
Crystal has a broad smile and infectious laughter, and is very proud of her new role as Camp Manager. She has lived at Camp Hope off and one for about a year, and says the camp has saved her. She knows the security, safety, and acceptance she has experienced at Camp Hope allows her to sleep at night and face a new day. She says the Camp is a place “where even if you screw up, people will give you a second chance and help you to get back into a good place.”
As the new Camp Manager she helps enforce the rules for remaining in the camp, which includes prohibitions against alcohol, drugs, weapons, or violent behavior. Every Tuesday she helps facilitate a Camp meeting, where residents discuss their issues and concerns, and she likes that each meeting begins on a positive note, with someone sharing something good that had happened in the past week. On Fridays all the Camp residents work together to clean up the camp, to show their pride in their community. She laughs heartily when she acknowledges that not everyone likes the chores, but she sees her job as to “be in charge of the grumpy old men!” Her leadership in the community has given her confidence and self-respect, and she says has helped keep her grounded. She has come a long way from when she arrived at Camp Hope with nothing more than the clothing on her back, after being on the streets for more than a year. Let’s support Crystal’s second chances at https://tentstorents.org/. Thank you for your support through this campaign.

Worship with us on Zoom
at 10:00am MDT every Sunday.

Trinity continues to rely on your offerings during this time. 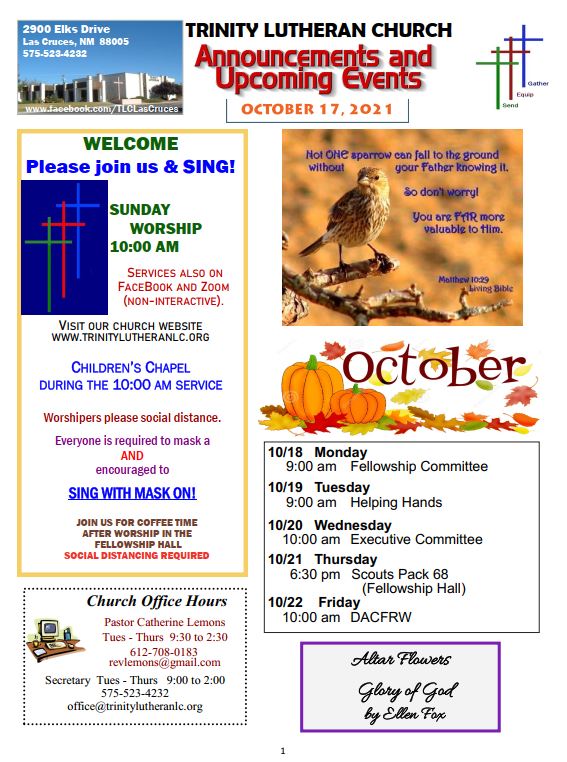